This past weekend we went to Austin, Texas for the first time!  We were in town for the USC vs. UT game, which USC unfortunately lost.  But, Austin was fun nonetheless and I cannot wait to get back to the city!

*Try to get a direct flight.  We always fly Southwest because we have the Companion Pass but most Southwest routes have a layover.  This ended up causing a problem for us as you’ll read later on.

*Do NOT be on a diet while exploring ATX.  There is too much good food and none of it healthy.  But, it is so worth the weight you’ll gain while visiting.

* Depending on the time you go be prepared for random bouts of rain.  It was about 90 degrees Fahrenheit, extremely high humidity, and random downpours throughout the weekend.  Ponytails are you friend!

*Everywhere in Austin is pretty casual.  You can dress up if you’d like, but most places we visited had a very causal (jeans and a t-shirt) type vibe.

*Bring bug spray or take lots of Vitamin B!  No one else in my group got bit, but I got eaten alive.

I absolutely HATE layovers.  It feels like you’re either always rushing to your next flight, or waiting for hours on end in the airport.  But, as I stated earlier, the only routes that worked for us had 1 hour layovers.  The flight out (SNA to AUS) was as smooth as could be.  No delays and we even landed a bit early.  SNA and AUS are both small airports which makes walking in and out very easy.

Our problem flight came on the way back.  We were scheduled to leave at 7:10 PM CDT with a 1 hour layover in Phoenix.  We had been slightly apprehensive about Hurricane Florence and how it would affect our flights if they started out in the Carolinas.  About four hours before our flight, I used the Southwest app to check the flight status.  What do I see?  All in red “Delayed” 8:35 PM Departure.  We had been delayed an hour and a half which meant we would miss our connecting flight in Phoenix since we only had an hour layover.

We frantically called Southwest trying to figure out what we could do.  We checked flying into LAX, Burbank, Ontario, Long Beach, and even San Diego.  Every last flight was already sold out.  The best they could do was get us on a flight into SNA the next day at 10:45 AM.  We knew we would end up boarding last because we booked our flight long after check-in.  We even tried upgrading to business select so we could sit next to each other, but they were sold out. The real kicker came when we found out why our flight had been delayed.  Apparently, someone left their car idling at Phoenix Airport long enough for the bomb squad to come out and investigate the car which led to an evacuation of Terminal 4 (Southwest).  Over 30 flights were cancelled and 300 flights delayed because someone decided to walk their girlfriend into check-in and leave their car running on the street.  We were not super happy, but did our most to make the best of it.

Airlines are notorious for not working with their customers.  We were bummed about being in the very last Southwest boarding group and figured we’d try to purchase last minute priority boarding at the airport.  Sure enough, every last priority boarding seat was sold out.  We were not happy: two 1.5 hour flights with us both sitting in middle seats far away from one another.  Our Southwest agent Bebe was extremely empathetic to our situation.  She saw we already got messed up by having to fly out a day late and add sitting in middle seats away from each other on top of that; not a good way to end a trip.  She ended up going out of her way to help us and wrote “XT” on our boarding passes.  This allowed us to board after the A group but before the B group and thus guaranteed us seats together.  In my 25 years of flying I don’t think I’ve ever seen an airline agent go out of their way to help this much.  With this act, Southwest has won my loyalty for all domestic travel.

We ended up taking a flight out the next day with a layover in Denver and almost missed our connecting flight again due to delays!  Long story short: always take a non-stop if possible, if not, 1.5 hours to 2 hours is probably ideal for a layover.  Anything shorter and you’ll be cutting it very very close if any delays occur.

If you’re a foodie, Austin is the place for you!  I felt our entire trip was planned around eating and good food.  Beware, Austin is not a food scene for those on a diet!

Our first food outing was Torchy’s Tacos.  It was an extremely casual restaurant (almost a cross between sit down and fast food), but the tacos are amazing!  They’re huge serving sizes.  I ordered one taco (chicken fajita) with sides of queso and guacamole and I could barely finish.  Torchy’s is most famous for their queso and I understand why.  It’s been three days and I’m already craving it.  The tacos are made fresh and have a great explosion of flavor.

Our next foodie experience was Banger’s.  We waited about 1.5 hours to be seated for brunch and it was so worth the wait!  They have a waiting area inside with tons of tables.  You can order light eats and drinks inside.  I opted for the Manmosa (1L of champagne with a splash of OJ).  Needless to say, it lasted me the full 1.5 hour wait and through brunch.  When we finally were seated outside and ready for brunch, I opted to attempt to be healthy and ordered the Banger Salad (Bratwurst on top of a salad).  It was AMAZING!  There were flash rains about half way into our meal.  We were super lucky and completely shielded from the rain, but some people weren’t quite as lucky.  When you go, keep in mind that Banger’s is all outdoor seating, so be sure to check the weather.  My favorite part about the entire meal was the live band playing outside.  It added to the ambiance and vibe of the restaurant and gave us a taste of Austin’s music scene.  I cannot wait to go back to Austin so I can visit Banger’s again! 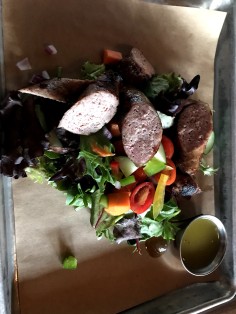 Our last food stop was The Original Black’s BBQ.  If you want good old fashioned BBQ this is the place to go.  Again, another long wait but so worth it!  While we were in line, we were offered a sample of the turkey and it was to die for.  We ended up ordering a quarter pound of turkey, quarter pound of brisket, half pound of ribs, and mac and cheese and potato salad as sides.  1 pound of meat is more than enough food for two people and we had plenty of leftovers.  Shockingly, the turkey was my favorite meat.  The BBQ sauce and a dab of ghost pepper sauce complemented the red meats perfectly.  The turkey was honestly fine on it’s own with no sauce.  We finished up with a pecan and peach cobbler which were also to die for.  My favorite part about the food here is you can taste the wood they cook it with.  It must have something to do with the 12 hours it takes them to cook each cut of meat.

Now for the Party

Now, Austin has a little something for everyone.  Whether you want to get down with the college kids on Dirty 6th or have a more relaxed night out on Rainey Street, Austin has you covered.

We watched both the USC vs UT game and the Canelo vs GGG fight at Little Woodrow’s.  It was the perfect mix of laid back and excitement.  Drinks were super cheap and food (pizza and wings) could be purchased right next door and delivered to your table.  The bar is half inside, half outside and the perfect place for a game watch.

After the game we were deciding where to go.  While I’ve long outgrown my college sorority girl party phase, we felt we couldn’t leave Austin without seeing what Dirty 6th was all about.  We made our way to Buckshot’s to start the night.  Dirty 6th is as crazy as it sounds: $14 bottles of champagne that people are drinking out of the bottle, $5 shots, $6 shooters, and the best 2000s throwback DJ I’ve ever heard. When we walked out of Buckshots and through Dirty 6th we were shocked.  The entire street was shut down: girls helping their friends who had a little too much to drink, random fights breaking out, and commotion everywhere you looked.  If I lived in Austin, Dirty 6th would absolutely NOT be my weekly hangout.  But, as a visitor, you have to see what it’s about.

If drunken college kids isn’t your thing, check out West 6th Street or Rainey Street.  West 6th is where your young professionals go out to play.  Rainey street is perfect if you want a more hipster vibe.  Don’t forget to bring your dog because most places on Rainey Street are dog friendly.

All in all I absolutely loved Austin, Texas.  Between the food and wide range of entertainment I always felt like we were doing something exciting.  I definitely will be making another trip back to Austin because a weekend wasn’t enough time to really see the city.

And so much more…

Below are a few recommendations we didn’t quite get to or weren’t mentioned in my post.  I’ll definitely be visiting these the next time I’m in Austin.  Feel free to email or DM if you want a more extensive list!

“You may all go to Hell, and I will go to Texas” -Davey Crockett